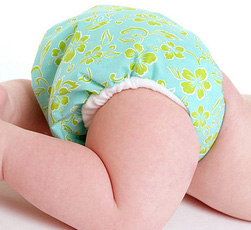 Did you know that using toweling nappies is an active form of recycling?

Oil is the raw material for the polyethylene in disposable diapers. It takes one cup of crude oil to make the plastic for one disposable diaper. Taking that a bit further, take into consideration the amount of plastic it takes to keep one baby in nappies for a year. Inside a diaper, you will uncover an inner layer made from wood and sodium polyacrylate. It also takes between 200 and 300kg of fluff pulp to supply one baby in disposables for 1 year. If you go the cloth diaper route, you will use less than 10kg of cotton for two year’s worth of diapering! This is a significant way to reduce oil consumption, and we all know that cotton is a very renewable resource.

Wood pulp also serves indirectly as a contaminant, because it has to be bleached for that radiantly white look of disposable diapers. The bleaching is done with Chlorine gas, and produces toxic chemicals such as Dioxins. These toxic chemicals make their way into the mill’s emissions AND into the diapers that are manufactured from that pulp.

It takes massive amounts of water to process wood pulp into paper for disposables. The production of a disposable diaper comes at a high environmental price both in water and in energy!

The single use lifecycle of disposable diapers automatically perpetuate their continued consumption, which causes undue stress on our natural resources and unnecessarily contributes to our landfills.

Research has concluded that disposable diapers are the third largest single consumer item in landfills, and represent 30% of non-biodegradable waste. Each baby diapered in disposables contributes about one ton of garbage, assuming an average diaper use of two years.

It is estimated that it will take a disposable diaper approximately 500 years to decompose in a landfill. Disposables are not readily biodegradable. The paper part of the diaper must be exposed to the air and sun in order to decompose at a faster rate. The plastic part of the diaper, we know is not compostable.

Cloth diapers have a defined ecological advantage over disposables. When using cloth diapers, the waste is sent to the municipal sanitary waste system, where it is treated.

When using a disposable, people wrap their little faeces and urine bombs into balls, and throw them in the nearest trash. Then, on rubbish day, that trash is taken to a landfill where World Health organization guidelines are being violated by the human waste being dumped there.

Our landfills have become a breeding ground for disease, which contaminates our ground water. When you toss a disposable into the rubbish, you are adding to the 84 million kg of raw faecal matter going into the environment every year. There are estimated to be over 100 intestinal viruses living on the human waste in our landfills and these viruses are possible contaminators of our water supplies that could bring these diseases back to us.

So! What will it be mother? Cloth or disposable? You have the right to choose – unfortunately, mother earth doesn’t!

What a first-time mom needs to know about prefold diapers